The Shortest Skirt in Shul

“All bodies are mistranslated prophecies”

Sass Orol’s debut poetry collection reexamines gender in Jewish history and steps into the present with daring and delight. From Avraham in the desert to a trans girl at the National Gallery, these intricately crafted poems explore embodiment, self-determination and desire. Orol engages with traditional sources and the Hebrew language itself to show us a view of the world from up close, pulsating with change.

Sass Orol wrote these poems from 2016-2019 in their childhood hometown of Raleigh, NC. While writing, Sass worked in their Jewish community with folks of all ages, leading songs, programs, and rituals. Sass also spent that time completing an MFA at NC State University.

In addition to writing, Sass loves cooking family recipes, playing guitar, and sitting down for long board games. They prefer food spicy and bitter over anything sweet.

Linguistically inventive and agile, this collection includes lactating patriarchs, a skin of rainbow scales, the bible of wanderlust, short skirts and shaatnez, pigs and Torah scrolls, and all the trans yearnings between the lily and the rose. As playful as it is profound, Sass Orol’s The Shortest Skirt in Shul is an exciting addition to your poetry bookshelf.

– R. B. Lemberg, author, The Four Profound Weaves  and Everything Thaws (forthcoming)

Sass Orol’s collection The Shortest Skirt in Shul glories in what is broken, circumscribed, and severed. Corpses at a body farm become tokens of love and reverence. The slaughter of Egypt’s first-born sons transforms into a strange affirmation for the trans speaker in “Daughter of Egypt.” “All bodies are mistranslated prophecies,” Orol writes, and humans are “tiny clay jars … filled with too much light.” Their poems grapple with the divine, with language, and with cultures that would trap us in genders and bodies others chose for us. For Orol, these are not only tragedies, but also invitations to craft
something better.  “Not everything can be fixed,” their poems remind us, but “if you don’t like the shape, / everything can be cut further.” Sure enough, this collection is a series of cuts, deep, precise, and joyous.

Sass Orol’s debut collection enacts its own beautiful & terrifying vision of the power of language (or liturgy, or prayer, or poetry): “[A] prayer cannot sit in a sealed jar        and remain a prayer / It needs to oxidize to be … smashed against a wall      tossed like a match / where it will catch fire and burn the wall down / It will burn the entire Holy City with it.” Like the forest fire which enables the giant sequoia to reproduce, the poems in The Shortest Skirt in Shul are a sacred burning, an incandescence in which ancient stories sprout into their new, luminous incarnations. These poems exuberantly explore gender, Torah, the masks we wear, and the way our bodies (and the ways we wear them) at once threaten stable narratives, and offer the kind of liberation that saves our lives. “Transition,” writes Orol, “is a recognition of the oldest shapes.” Reading these poems, we are transformed, we are awakened; we are newborns, recognizing within ourselves the very ancient stories we contain.

“Even if I prefer not to be known as a man,
at least I am known as a man of oasis—
for floors of the softest, heated sand
and heavy iron braziers breathing quiet fire,
for crisp honey cakes, for my wide tent
open on four sides. But after this
will strangers lie utterly spent on my rug
shivering at noon on the hottest day
and whisper for another cup of tea?
Will they even come?”

“Avraham,” replies the god, “Dieyeka.
It is enough that you and I are in this world.
Even if you choose not to follow me
down this final path, it has been enough for me
to make the mistakes that lead me to you.

“Not everything can be fixed. Not the tiny clay jars
I filled with too much light at the beginning,
not a string snapped when you’re on stage
with the floodlights up in the middle of your best song,
not a world set spinning, not a fully severed piece of skin.

“But all of these things, if you don’t like the shape,
everything can be cut further.”

Some people keep foods separate
on their plate, white gaps, no sauce.
These people will never love me.

Some use the back of their knife
to corral rice neatly onto a fork
switch hands and then taste
the bleached grains.
I am not for them either.

But I watched you
when you thought
no one was looking

to take a mouthful of flowers
white and long, crush the petals
between your teeth

heedless of thorns
or the gazelle’s
probing tongues

you inhaled
before lifting
your head.

My beloved is mine and I am
hers, she who will graze
among the roses

who will muddle herbs
but never sniff them individually.
I am made for such reckless taste.

When the green Sierra figs
have fully digested the tiny wasps
that burrow in their backs
through a pinched hole
losing their wings on the way
so all that’s left is to desiccate
among the pink jammy acids.

A season for telling our preteens
that forgiveness is a commandment
for imagining a god that gives
permission to wage war
but orders us let go of petty grudges
over who lost the glitter gel polish
or left the snowball dance early.

and finding it easy to forgive
because it’s true—
god didn’t make me a woman
You did. Yes, You, You Reader

who now will picture that tiny wasp
in the exact moment its first wing separates
at the iridescent shoulder, so easy
it could have been perforated
still it pushes onward
as the second wing sticks and rips
and then the acid whispers
open to its buzzing, swollen abdomen.

You are blessed, You who hears
petty grudge and thinks Girlhood
you who feels the wasp’s final shudder
and thinks Inheritance. Bless you. 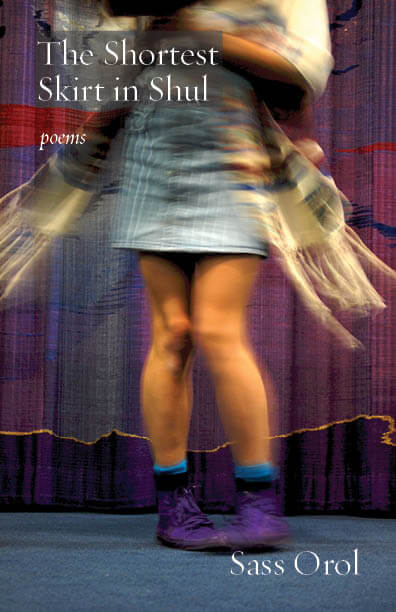 You're viewing: The Shortest Skirt in Shul $14.95
Add to cart