R.B. Lemberg’s poems are a manifesto of memories, unearthing worlds that are gone and poignantly present: their childhood in the Soviet Union, suspended between Ukraine and the permafrost of Siberia, among the traumatized, silent, persecuted members of their Jewish family; Lemberg’s coming of age in Israel, being the other wherever they go, both internally and externally, in multiple identities, languages, genders; and the arrival in “the lost land” of their America, where they have put down “tentative roots.”

Every line in this stunning, lyrical memoir is chiseled with the poignant precision of ice into a coruscating cascade that engulfs us with the author’s sensations of solitude, anger, grief; sometimes hurling like an avalanche, sometimes tenderly unfolding like constellations in a circumpolar sky – leaving open the possibility that with the disturbing truths covered for decades, the thawing permafrost from Lemberg’s past might also lay bare layers of love.

R.B. Lemberg is a queer, bigender immigrant from Eastern Europe and Israel. Their work has appeared in Lightspeed, Strange Horizons, Beneath Ceaseless Skies, Unlikely Story, Uncanny, and other venues. Their book The Four Profound Weaves was a finalist for the World Fantasy, Nebula, Ignyte, and Locus Awards.

Their pronouns are they/them/theirs.

R.B. was born in Ukraine, and lived in subarctic Russia and Israel before coming to the US for graduate school at UC Berkeley. They are a sociolinguist, and they work as an associate professor at a Midwestern university.

Their web site is at http://rblemberg.net/

In Everything Thaws, bodies and memories break through the (supposed) permafrost. R. B. Lemberg’s haunting poetic cycle is unsparing and keenly observed. Tracing their path from Ukraine to the Vorkuta GULAG, Hungary, Israel, and the USA, Lemberg crafts an unforgettable cartography of trauma, Jewishness, gender, war, and family history. This book expertly traverses dangerous ground. Children play in forests littered with bombs, and life-saving bridges disappear in snowstorms. In such terrain, a wrong step could mean death, yet there is no choice but to keep moving. Against cruelties, enforced silences, and the weight of generational horror, what can Lemberg do except “put it all into poems, / or, when the guilt gets too much, into turnips”? The thaw may be disastrous, but it must be faced, and Lemberg masterfully holds our gaze.
—Izzy Wasserstein, author of All The Hometowns You Can’t Stay Away From

These are poems of reflection and empowerment, a journey of (self-)discovery brimming with raw feeling and a survivor’s courage and wisdom. Lemberg excels at boldly drawing vivid scenes, memorable and complex characters, and emotionally charged landscapes. A deeply moving reading experience.
—Vitaly Chernetsky, author of Mapping Postcommunist Cultures: Russia and Ukraine in the Context of Globalization

‘Turn it and turn it, for every thing is in it:’ R.B. Lemberg’s work has long been full of observations of the stark, the painful, and the utterly true. Taking its opening cue from the wreck of our climate, Everything Thaws is a swift-flowing personal history and a biting cultural commentary. It is also an intricate-illuminated map through what can’t help emerging from that thaw: the diaspora of transness, Jewishness, how to be a parent, how to be a child. I was so stunned by its honesty and its hope; I have read and re-read it and there is always something newly revealed.”
—Jeannelle M. Ferreira, author of The Fire and the Place in the Forest

R. B. Lemberg is “done destroying [themselves] for the sake of that anxiety of needing to look as if nothing ever happened.” These poems are full of what happened — the food that was stolen to survive, the gender fails, the towns that no one believes existed, the near deaths and the gravesites. According to Lemberg, the past and the cold are as heavy and fragile as the thawing permafrost. While reading Everything Thaws, you’ll feel the fleeting nature of everything we’ve named permanent, until “the truth itself is cratering.”
—Sass Orol, author, The Shortest Skirt in Shul

R.B. Lemberg’s memoir-in-poetry is full of glacier-sharp truths, and moments revealed between words like bodies beneath melting permafrost. As it becomes increasingly plain how deeply our world is shaped by war and climate change and grief and anger, articulating that shape feels urgent and necessary and painful and healing. Lemberg refuses to look away from people and systems that demand that we suppress ourselves—our words, our religions, our bodies, our queerness—and through their keen observation shows how we can insist on being ourselves anyway.
—Ruthanna Emrys, author, A Half-Built Garden

Everything thaws. I learned this lately
when the permafrost in Vorkuta started to give way,
revealing secrets nobody asked for:
not wooly mammoths or ancient cave artifacts but
bodies of the GULAG prisoners thrown out – not even buried
because the snow would take care of its own.

You could trust the snow back then. And now you can’t
trust anything.

Let me tell you why this matters to me.
When I was four, my father came into the room where I slept and kissed me –

it was not “my” room. We only had two,
serving as gathering/art/working/sleep space as needed.
He thought I was asleep. I was.
My spirit hovered by the door, high by the twelve-foot ceiling
while I watched him lean over the slats of the bed.

He said nothing I could hear,
but he loved me, and he was leaving – that was clear,
leaving on the train and then on the train again,
three solid days of travel,
going north beyond the Arctic circle
to live for a while in Vorkuta
where once they killed people in the GULAG, but many
survived and either did not want or could not leave,

among them a distant relative of my mother’s, who said he would help
my father to find a job and stay there
because the KGB was bothering him
here in Ukraine,
demanding he inform on his friends,
but he would not.

A few decades later
I began to write a story about this: the GULAG
to the west of the Ural mountains, prisoners who flew around
as willow ptarmigans. “There was
no GULAG in Europe,” a crit partner informed me
with the usual confidence of white Americans.
She was an expert, you see,
having researched GULAGs for her own story,
and she meant no harm but she kept writing and I
stayed silent.

Long after we left Vorkuta, the melting permafrost
which I am witnessing over social media
disturbs me. Two continents and as many lifetimes ago
my father was happy there. Perhaps nobody else was, but he was,

far away from the KGB,
not so far away from my mother (but far enough),
snug in his wooden studio
assigned to him by the Soviet Artists’ Union.
Among plates of colored glass, among
his glass-cutters and chisels and his blocks of wood,
the snow forever clenching the ground
its vast masses hiding all the dead; there he was
as permanent as permafrost, just as silent
but warmer.

by tying dead lemmings to strings and spinning them about.

When I came back to Ukraine
after a year in Vorkuta
I drew the northern lights to show my classmates. I drew myself
dragging a little sleigh, head up to the vast shimmering road in the sky.
It was my road
that showed me the way when I was six –
white, wide, stretching across the black winter sky
in complete silence, under the immovable permanence of the cold.

“You’re lying,” my classmates yelled, and later
the whole class trapped me in the school attic
and beat me, screaming that I was a Jew
who believed in G-d (remember, these were Soviet times
and believing in G-d was forbidden)
and that I was lying
about the northern lights I saw in Vorkuta.

They had never seen the Northern lights, but they knew
what a Jew looked like.

A Jew looks like me.
A Jew
looks like this person with too much curly hair and an eating disorder
and too many academic degrees and too much
change, less than a model immigrant
from too many places
to too many places,
never believing that I will be heard

because people have trouble believing
that things exist that they have never seen.

Every time I open my mouth or flex my fingers to write
I am putting a brave face upon the thawing permafrost.

I am not lying. I am just
constantly changing languages, idioms, continents, genders, homes, and I am
not even sure how to mourn from this vantage,
let alone perform any other human activity
let alone be a good
anything:
a good child, a good immigrant, a good parent, a good spouse, a good
writer
(only if I’m silent)
(squeezing my lips shut so tightly)
(clenching my fingers)
(trying to fit)
(always trying to fit)
(remembering that where I’m from, a Jew
cannot be good by definition, a Jew
must become a person instead, become a Jewperson and then simply
a good Soviet citizen
but secretly a rootless cosmopolitan

who never speaks anything but the purest Russian
who eats no herring or raw garlic under any circumstances
before going out,
because everybody knows that Jews stink of those two things.

This is the one permanent axis of my identity,
that I am a Jew: that is
a rootless cosmopolitan
at home nowhere
in no language, in no country, not even among other Jews, eating
herring and garlic with a sense of deep satisfaction
that comes with the hope that, living in the Midwest,
nobody’s going to surreptitiously sniff me for that
telltale stench of a Jew which
cannot be spoken of in polite society,
cannot be uprooted,
cannot be forgotten
or forgiven;
only silenced. 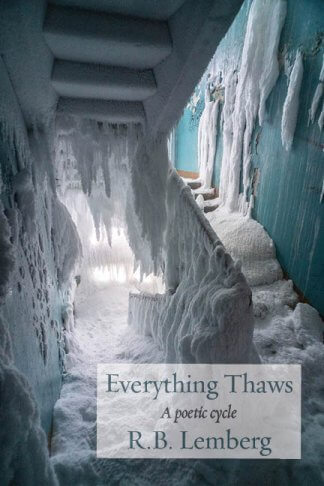 You're viewing: Everything Thaws $14.95
Pre-Order Now