“There must have been some moments. What remains?”

At once accessible and lyrical, the poems of David Curzon represent a spiritual imagination in the broadest sense of the term. The ninety poems in this collection are special for their autobiographical themes—a youth in Australia, spiritual wanderings in India, and adoption of New York City as home—but also reflect the deep resonances of art and ancient texts in the poet’s inner world. Curzon’s poems on biblical themes read like modern midrashim and woven throughout are deeply felt responses to the Jewish historical experience. Critic Andrew Bullen, reviewing The Oxford Book of Australian Religious Verse, writes: “For me, David Curzon’s ‘Psalm 1,’ a post-Holocaust midrash, was the discovery of the book.”

David Curzon is author of several books of poetry — Midrashim, Dovchik, and The View from Jacob’s Ladder — and editor of the anthology, Modern Poems on the Bible. Born in Melbourne, Mr. Curzon has a B.Sc. in physics and a doctorate in economics. He worked for NASA in Washington, and for the United Nations where, as Chief of the Central Evaluation Unit, he assessed peace-keeping operations and refugee and environment programs. He lives in New York City.

“David Curzon’s striking poems in What Remains read like the carefully distilled observations of a wise and reflective mind. We come to see what he sees, illuminating the experiences of day-to-day life in words that seem as if they were engraved in stone, not mere ink on paper. A beautiful book.”
—Barry W. Holtz,  Theodore and Florence Baumritter Professor of Jewish Education, Jewish Theological Seminary

“Aphoristic, ekphrastic, and precise revelations animate What Remains. In his stunning rewriting of Psalm 1 and other biblical passages, Curzon shows himself to be a fabricator, a collector, and an heir to the literature, arts, and wisdom traditions of the planet. He makes you think, and think again, and feel the impact of his insights.” —Alicia Ostriker, author of The Volcano and After

and up above,
shy and hidden,
nibbling the leaf-tips,
koalas were feeding

and when I woke
I was greeted by
the laughter of
the kookaburras.

There must have been some moments. What remains?

The honeymoon: I woke in that spacious room
while she was sleeping, eased out of the bed
and opened up one blind and in the dawn
I watched the renewals of her breathing form.

Returning, I’d cleared customs: there she was
the only person in the crowd beyond
the barrier, then she caught sight of me
and all her waiting body waved her wave.

The separation: we’d been out at night,
had come back home in silence, just got in,
when she, while taking off her coat, had turned
and told me simply, “I’ve decided.” Yes,

that moment, too, is part of what remains.

Blessed is the man not born
in Lodz in the wrong decade,
who walks not in tree-lined shade
like my father’s father in this photo, nor
stands in the way of sinners waiting for
his yellow star,
nor sits, if he could sit, in their cattle car,

but his delight is being born
as I was, in Australia, far away,
and on God’s law he meditates night and day.

He is like a tree that’s granted
the land where is it planted,
that yields its fruit by reason
of sun and rain in season.

The wicked are not so, they
burn their uniforms and go their way.

Therefore the wicked are like Cain
who offered fruit which God chose to disdain.

And the way of the righteous is Abel’s, whose
sacrifice God chose to choose
and who was murdered anyway. 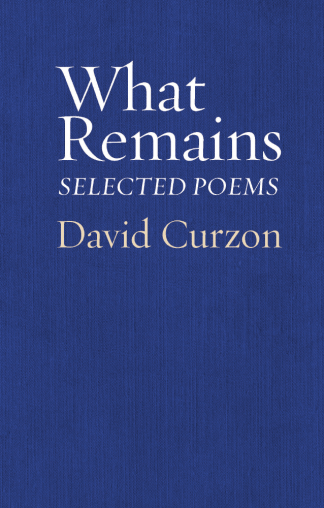