A Delightful Compendium of Consolation

A Fabulous Tale of Romance, Adventure and Faith in the Medieval Mediterranean

Karimah, a charming, headstrong Jewish young woman in 11th Century Egypt, follows her heart to live a life of adventure; as a brigand targeting desert caravans and as a pirate on the high seas. Although unpredictable, Karimah is nevertheless guided by her own steadfast ideas of honor and tradition.

The book is presented as a series of “found” Cairo Genizah (old book depository) documents. Writing home to her brother, Karimah quotes not only from traditional Jewish texts, but also from the Arabian Nights. Rabbi Nissim, writing from North Africa, comforts Karimah’s father with tales from classical rabbinic literature.

A Delightful Compendium Of Consolation is historically accurate. With this book, Rabbi Visotzky, professor of midrash, proves to be not only a master teacher, but a master storyteller as well.

A Delightful Compendium of Consolation is engrossing storytelling itself. Professor Visotzky’s scholarship bestows an immediacy to his narrative. Having worked firsthand on the Geniza writings, he is able to offer the reader a real feel for the culture and mores of the time. 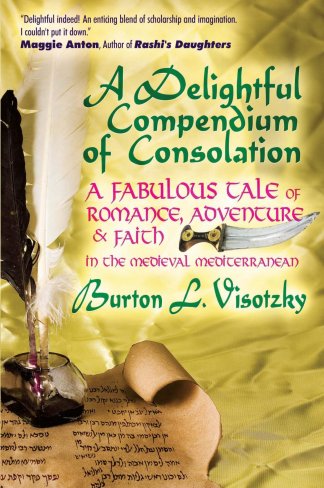 You're viewing: A Delightful Compendium of Consolation $16.95
Add to cart