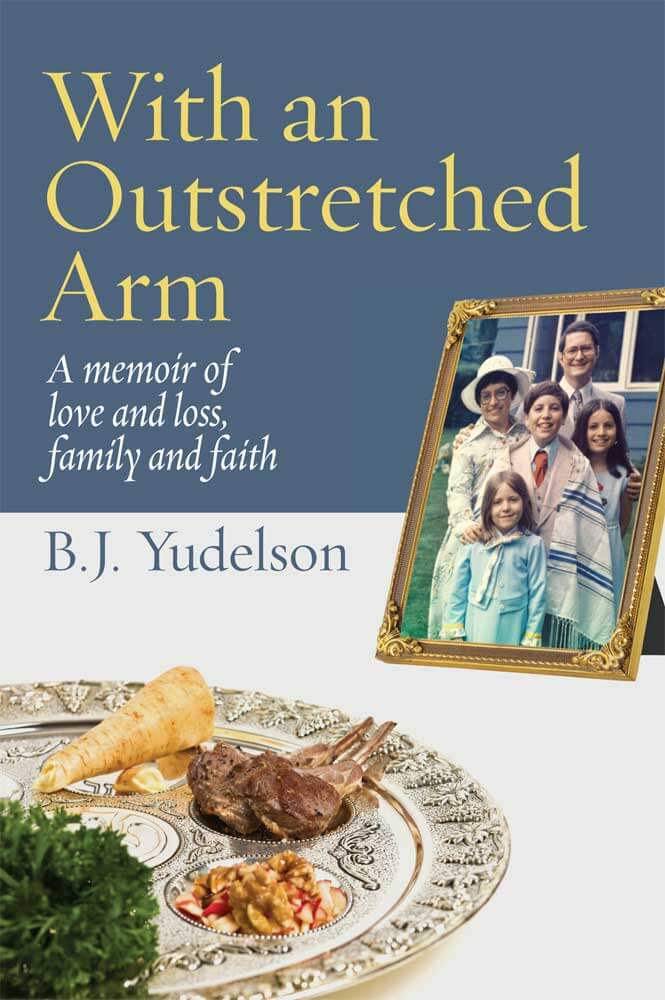 So we’re at the point where the National Review and the New York Times are attacking Joe Biden for how he grieves.

If one does want to engage seriously with the world of parental grief, three of our authors are in that very sad category of bereaved parents, for which Hebrew has a more redolent word, שכול.

B. J. Yudelson’s memoir, “With an Outstretched Arm,” encompasses the arc of her life, from growing up very Reform in the South to being a grandmother and a member of an Orthodox congregation in the snowy north.

The dramatic center of that arc was the Friday night where her 13-year-old daughter was struck and killed by a drunk driver while walking home from shul at an NCSY Shabbaton on February 6, 1981.

So she embarked on a path of trying to help others. She studied to be a hospital pastoral counselor. That was a new field in Israel, where hospital clergy was there to certify kashrut, not minister to emotional needs of patients.

“Sherri Mandell has done it again with this deeply personal and profoundly moving book about caring and compassion under the most trying of conditions. Reaching for Comfort will inspire readers with its compelling prose, riveting narrative, and uplifting spirituality.”

“A poignant, deeply human look at the author’s attempt to deal with her own unspeakable pain by opening her heart to the pain of others.” That’s from an Amazon review.

(To return briefly to the political realm, which launched this thread: It’s worth highlighting the contrast between this who would “deal with [their] own unspeakable pain by opening her heart to the pain of others” and those deal with their pain by inflicting pain on others.)

Parenting on a Prayer was already finished and in the editorial pipeline when Rabbi Amy Grossblatt Pessah’s 19-year-old son Josef died, nine months after a brain cancer diagnosis.

“Every page of this inspiring work is filled with lessons to live by.”
— Rabbi Naomi Levy

Obviously, the book takes on added poignancy under the cloud of Josef’s death, described in the book’s dedication and afterward. And since all parenting takes place under the shadow of the potential of this infinite grief, that works. #MashiachNow

Jay Michaelson wrote The Gate of Tears in response to the grief he felt at the death of his mother.

But I don’t have to wonder about what she would say about people criticizing Biden for he handles his grief. Or about the people at the @nytimes that decided this was a story.