Words for a Dazzling Firmament

Poems/Readings on Bereishit Through Shemot

In his third book of poetic Midrash, Abe Mezrich breathes new life into the first third of the Torah.

“Abe Mezrich cuts straight back to the roots of the Midrashic tradition, sermonizing as a poet, rather than idealogue. Best of all, Abe knows how to ask questions and avoid the obvious answers.”
—Jake Marmer, author of Cosmic Diaspora

Abe Mezrich wants to know what our sacred texts say about our world right now. Sometimes he writes down his answers to those questions.

His writing, some featured (sometimes in edited form) in this book, has appeared in 929, The Forward, The Los Angeles Jewish Journal, Lehrhaus, Tablet, The New York Jewish Week, and Zeek. His prior books, The House at the Center of the World: Poetic Midrash on Sacred Space and Between the Mountain and the Land Lies the Lesson: Poetic Midrash on Sacred Community, are also available through Ben Yehuda Press.

He lives with his wife Kathi and their three children. Learn more at www.abemezrich.com.

"What God Told Noat Before the Rain Fell"

What God Told Noah Before the Rain Fell

Where there is no great one to hold the earth,
you must fill the emptiness;

sometimes all that stands against devastation
is you on a ship in the ocean
waiting for birds to fly back.

Now: take the Creation in two by twos
and hover above the rivers
over the mountains,
like revelation.

I will look away.

The birds are circling and circling
their feet aloft
and the world needs you:

you, the one
who must tend the drowned
and saved;

seeing what she saw,
what else could she do
but what a mother does—

salt was on that ground
but when she looked

There are too many shepherds here
for Jacob to speak to Rachel alone.

Together they will move the enormous stone
that covers the well’s mouth.
Then they will take the well’s water and go.

But Jacob does not want to wait for more shepherds.
He wants to speak to Rachel right now,
when his heart needs her.

That is why he moves the enormous stone
himself,
with his own hands.

Now the shepherds can come and draw water
before they had ever hoped.

Sometimes love is so strong
it reaches past you
and provides for a world.

None of you shall go outside the door of his house until morning.
–Exodus 12:22

It went like this: All of them in their own homes,
at their own tables.
Outside was the danger in the darkness.
And then the next home, the next family inside.

All that time before they had toiled together,
but it did not make them a nation yet.

Now they were one. 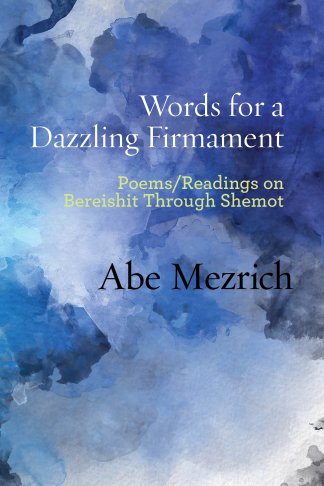 You're viewing: Words for a Dazzling Firmament $14.95
Add to cart