Why Israel (and its Future) Matters

Presented in the form of letters from a rabbi to his sons, Why Israel (and its Future) Matters) makes the case to Jewish millennials that they need Israel as a source of pride, connection, and Jewish renewal, and Israel needs them for the liberal values that they can bring to the Zionist enterprise.

Morally unflinching, intellectually courageous, Rabbi John Rosove has provided us with a desperately needed map for how to navigate the growing tensions between progressives and the state of Israel. By calling out Israel when it has done wrong and calling out its critics when they exaggerate Israel’s flaws, Rabbi Rosove echoes the ancient prophets, who criticized their people but always loved and defended them. This thoughtful and passionate book reminds us that commitment to Israel and to social justice are essential components of a healthy Jewish identity.
—Yossi Klein Halevi, senior fellow, Shalom Hartman Institute, Jerusalem

“Rabbi John Rosove’s letters to his sons, published in this volume, are tender and loving, but also gripping and challenging, as he grapples with modern Israel, Jewish identity, relations between Israelis and Diaspora Jews, and perhaps most significantly whether ‘you can maintain your ethical and moral values while at the same time being supporters of the Jewish state despite its flaws and imperfections.’ Rosove pulls no punches, laying out both the imperfections and the ethical choices surrounding Israel and American Jews. But he also manifests a passionate
love for Israel and what one scholar has called “values-based aspirational Zionism.’ This book will raise as many questions for Rosove’s sons as it answers; it is a book that many of us wish we had written for our own children.”
—Daniel Kurtzer, S. Daniel Abraham Professor in Middle Eastern Policy Studies, Princeton University’s Woodrow Wilson School of Public and International Affairs; Former US Ambassador to Israel (2001-2005) and US Ambassador to Egypt (1997-2001)

“What a marvelous and refreshing book! A liberal social activist and committed Reform Jew, Rosove makes the case to Jewish millennials that they need Israel as a source of pride, connection, and Jewish renewal, and Israel needs them for the liberal values that they can bring to the Zionist enterprise. In its call for ‘aspirational Zionism,’ the book is honest and tough about Israel’s flaws, but optimistic about the country’s direction and filled with practical strategies for promoting change. This is a no-nonsense, straight-talking work, intellectually rigorous but deeply personal. And most important, it demonstrates in compelling prose to young Jews—and Jews of all ages—that Jewish life cannot be sustained without Israel at its core.”
—Rabbi Eric H. Yoffie, President Emeritus, Union for Reform Judaism

“At a moment of looming crisis, when young Jews in America are increasingly alienated from Israel, Rabbi John Rosove offers this timely, wise, and candid reflection on the fate of Zionism in the twenty-first century. In the form of letters to his sons, he formulates compelling answers to one of the most difficult questions of our time: why should we care?  More particularly, why should young Jews care about an Israel that does not reflect their political and moral sensibilities? His missives are essential reading for all concerned with the Jewish condition today.”
­—David N. Myers, Kahn Professor of Jewish History, UCLA, and President of the Board, New Israel Fund

“A moving love letter to Israel from a rabbinic leader who refuses to give into despair, but instead recommits to building a democratic Israel that lives up to the vision of its founders.”
—Rabbi Jill Jacobs, Executive Director, T’ruah: The Rabbinic Call for Human Rights 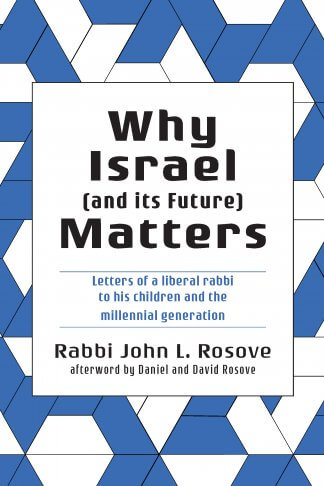 You're viewing: Why Israel (and its Future) Matters $18.95
Add to cart