The Matter of Families

In his latest collection, Robert Deluty explores the many layers that bind us to tradition, faith, customs and, more than anything else, to the people that represent this visceral and often inexplicable connection: our loved-ones, our relatives, our next-of-kin.

Deluty intertwines memories of his ancestors, recollections of moments spent with his wife and children with snippets of fellow yet anonymous Jews he has collected over the years: a joke overheard on the street, a glance caught through the window of a subway train, a thought prompted by an old sign in the neighborhood. The result is an intimate and universal testament to the poet’s sense of belonging to both his family and the broader Jewish Family — full of associations, sensations, and devastating, comforting, and unbreakable truths.

“Robert Deluty’s career-spanning collection of New and Selected poems captures the essence of his work: the power of love, joy, and connection, all tied together with the poet’s glorious sense of humor. This book is Deluty’s masterpiece.”

—Richard M. Berlin, M.D., author of Freud on My Couch

“Robert Deluty’s wonderful collection of new and selected poems manages to conjure up entire worlds in the space of a few lines. In The Matter of Families, Deluty has selected the best among the best of his work, allowing the reader (as the poem, Corner Store, 1966, puts it), to taste sweetness and to smile.”

—Ronald W. Pies, M.D., author of The Doctor’s Poems and The Levtov Trilogy

“Poetry, at its best, promises to awaken us to connections that we were not aware of, gently using the music of language to enable us to more exquisitely hear what can be known, what can be experienced, what can be done. Robert Deluty’s poems, rich with his steady presence and tender gaze, so generously fulfill this promise, making our world feel both closer and larger at the same time, bringing a kind and startling intimacy to the beautiful mysteries of human relatedness, entering our soul so quietly and so deeply that they somehow become a part of us.”

—Brad Sachs, Ph.D., author of Why Am I Telling You This?

He loved to tell the story of how,
On his first day of Yeshiva
In Poland’s Jewish Ghetto,
Mothers brought honey cakes,
Shaped like the letters of the
Hebrew alphabet,
So that their children
Would come to associate
Learning with sweetness.

A brilliant man, deprived by war
Of even a high school education,
He set foot on a college campus
More than fifty years later to attend
His first son’s PhD conferral.
When introduced to the faculty,
With utmost respect and pleasure,
He bowed.

His second son, now a professor,
Remembers these stories
As he teaches his daughter
Her ABCs.

First, the elder explains
To his grandchildren
What a typewriter is.

Next, he describes
Sitting in a classroom
With twenty-nine other
Seventh graders learning
To peck at the keyboard of
A manual Smith Corona.

Finally, he relates how,
Because of his visual-motor
Ineptitude, he nearly failed
The class, eking out a low D
By turning in on the final day
Of the grading period
An extra-credit report on
The history of the typewriter
Which he wrote in longhand. 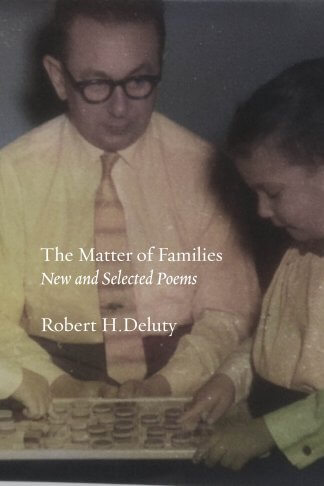 You're viewing: The Matter of Families $14.95
Add to cart