The Five Books of Limericks

A chapter-by-chapter retelling of the Torah

From chaos began the creation,
Each flora and fauna its station.
The water and sky,
The earth they wind by,
Last Adam, who had to be patient.

From The Introduction to The Five Books of Limericks:

“I ascribe to an ancient metaphor that we should ‘turn it and turn it,’ endlessly studying the Torah this way and that, because we can learn something from everything about it. Each oddity, conundrum and textual (even calligraphic) anomaly beckoned ancient rabbis and teases contemporary scholars into searching for previously underived meanings.

“That’s what I did here. The intent of each poem is to share an (not the) essence of a chapter. I investigated each one to see what a lilting, poetic lens would magnify. Humor, revealing of human imperfection, is arguably essential in contemplating it. The opposite of heretical, these poems are a product of my enduring curiosity about and reverence for the Torah. Limericks are rarely expressions of awe, so I understand the confusion.”

—From The Introduction to The Five Books of Limericks:

“Rhonda Rosenheck captures the essence of the textual bites she chooses to explore, artfully distilling both narrative and legal sections of the Five Books. The limericks often feel light hearted, but upon closer examination, they ingeniously speak on two levels – including a deeper one – perhaps unbeknownst to the author. I was often inspired to search for the Torah verses Rosenheck’s poems interpret, and found myself reading them differently than I did before.”

From chaos began the creation,
Each flora and fauna its station.
The water and sky,
The earth they wind by,
Last Adam, who had to be patient.

Paradise. A serpent got loose
And gave the first woman a goose.
“All knowing you’ll be;
Just eat from this tree.”
Eve’s blamed when they’re nabbed for the ruse.

Of two brothers’ gifts, one was druthered.
No matter how well they were mothered,
Cain did poor Abel in,
And was marked for his sin.
Then Adam and Eve had another.

Male and female, in this tale, were one.
This old Adam had Seth as a son.
Begettings begotten,
Not one gen forgotten,
Until Noah, from Lemach, was wrung.

Amok ran all the people on earth,
Doing mischief and evil from birth.
An ark N. constructed.
His fam’ly’s instructed:
Bring a pair of each critter to berth.

“Most think of limericks as the landing zone for jokes, but Rosenheck has elevated this accessible form by writing Biblical limericks inspired by the first five books of the Hebrew Bible. I delighted in the whimsical, thought provoking poetry created in this unexpected format. Even without having studied the source writing, I was touched by the messages. What a brilliant creation!”

“A truly delightful collection of limericks (to the eyes and the ears)! Rhonda Rosenheck captures the essence of the textual bites she chooses to explore, artfully distilling both narrative and legal sections of the Five Books. The limericks often feel light hearted, but upon closer examination, they ingeniously speak on two levels – including a deeper one – perhaps unbeknownst to the author. I was often inspired to search for the Torah verses Rosenheck’s poems interpret, and found myself reading them differently than I did before.”

“Creativity makes the familiar new. Rhonda Rosenheck’s limericks push the reader away from reverence that keeps the Torah at a distance. These poems create an intimacy that brings the holy texts closer. Thank you, Rhonda.”

“Rhonda Rosenheck has done the impossible. By using limericks and embracing their irreverent tone, she has created a biblical commentary that is truly unique. Each chapter of the Torah is distilled into its own limerick, leading the reader to reconsider the meaning of the original text, and opening avenues for interpretation that are both fun and insightful. Rhonda Rosenheck knows the Hebrew Bible, and she knows that it can stand up to the sometimes silly, sometimes snarky, but always insightful scholarship packed into each one of these interpretive jewels.”

“Rhonda Rosenheck’s The Five Books of Limericks sheds an unexpected, creative, and unique light on the books of the Torah. Written with such smart humor and engaging insight that even a lapsed Methodist was not only entertained but educated.”

“Reading Rhonda Rosenheck is, always, like having a few drinks with an eagle. The sort of people who think the particular is the contrary of the universal also think the gimlet eye sees nothing funny. They ought to read this book, and learn better. It’s personal and particular; its voice, specific. (Some of the meters, scansions, and rhymes work in New-Yorkese but not in Received Standard Texan … at first ….) It’s acute as a raptor’s gaze … over a shot of wry on the rocks. If these subtle, genius limericks don’t expand your spirit, you need a new soul: because you need this book. Buy it, and wait eagerly for the next.”

—Markham Shaw Pyle, author of Tonight at the Morpheum: A Hospital Farce in Three Acts; “Fools, Drunks, and the United States:” August 12, 1941; Benevolent Designs: The Countess and the General: George Washington, Selina Countess of Huntingdon, their correspondence, & the evangelizing of America; &c.

Rhonda Rosenheck holds a BA in English Literature and Rhetoric from Binghamton University and an MEd in Jewish Education from the Jewish Theological Seminary of America. She studied at Hebrew College in Newton, MA, completed a graduate fellowship at the Hebrew University in Jerusalem, and studied Applied Linguistics in a Master’s Program at Nova Southeastern University.

Rhonda’s publications include a poetry chapbook titled Looking: Out, Up, In & Under Rocks (Elephant Tree House Press 2018), a self-published chapbook entitled Sin No More! A Biblical Sea Shanty (2020) and an illustrated book of humor titled Yiddische Yoga: OYsanas for Every Generation (ill., Dana Toons, Ben Yehuda Press, 2016). Retired from religious educational leadership and again from a copyediting business, Rhonda writes and operates a writer’s retreat near the Mohawk River. She lives just outside Albany, NY.

I took liberties. I shortened words and names to fit. The word “Generation” became “gen.” If rhythm or rhyme demanded it, Moshe got shortened to Mosh, Hagar to Gar, Moab to Mo, etcetera.

Mostly, I wrote in past tense, but when a line sounded better to me in present tense, I didn’t fight it.

I exploited perfect hindsight and access to distant future references in my omniscient-narrator voice. Sometimes I reported the action neutrally, other times I judged. All derision is mine; please don’t hold the early-readers, expecially not the nuns or rabbis, accountable for my snark.

With rare and noted exceptions, each chapter includes only those narrative elements, actors, dictates and/or warnings found within that chapter. Often, I summed up an exchange with invented dialogue. I made up the words, but never whose words they might have been.

Lastly, I decided to demarcate mortal speech with quotation marks and allow God’s speech to hover ambiguously. To ease the strain on your eyes when reading Deuteronomy, which is largely spoken by Moses to the Israelites, I used quotation marks only when Moses or the omniscient narrator is quoting another person. 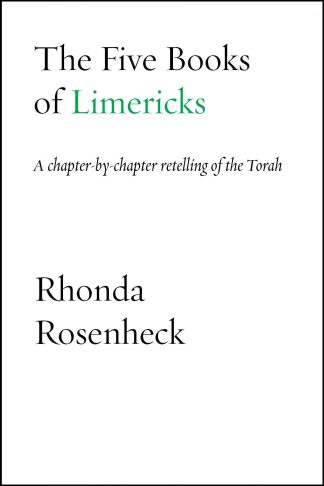 You're viewing: The Five Books of Limericks $14.95
Add to cart