I Loved My Mother on Saturdays

and Other Tales from the Shtetl and Beyond

4 in stock (can be backordered)

“I Loved My Mother on Saturdays” is a celebration and compilation of the work of an award-winning Jewish storyteller that demonstrates the appeal of oral storytelling.

Funny and bittersweet renderings tales of an early twentieth-century American immigrant are told by a master storyteller. Roslyn evokes her childhood in the vanished world of the European shtetl, her transplantation to America and her time as a businesswoman in the garment industry in New York, as well as her introduction into the world of storytelling.

Where other Jewish storytellers tell stories about the shtetl—at eighty-five, Roslyn remembers it. The book will not only entertain and inform, it will offer an insight into the past that is unlike any other.

In, “Succos is for Sauerkraut,” Roslyn remembers how her grandparents tried to keep her out of trouble while they prepared for the Succos holiday, all the while making her feel special. In “A Can of Paint,” Roslyn remembers painting the outhouse in her underwear with her irrepressible cousin, Zisl.

There are also tales about the early twentieth-century American immigrant experience and trying to become “a real American girl.” Among them, “Less Work for Mother”, which is about the unfortunate choice of a non-kosher piece of cake from Horn and Hardart’s automat as a Mother’s Day present.

And Roslyn brings us up to date with tales of New York life. She’s your favorite aunt, your bubbe, your mother’s most fun friend. And her stories? Always wonderful.

Roslyn Bresnick-Perry was born in Wysokie Litewskie, in what is now Belarus. She emigrated to New York City in 1929, at the age of seven.

Her wisdom and humor have captivated audiences at storytelling festivals theaters throughout the country and abroad, including the prestigious National Storytelling Festival in Tennessee, the Smithsonian Folklife Festival, the Victory Theater on Broadway and the Library of Congress, and she has served as teller-in- residence at the International Storytelling Center. Her work has also been broadcast on National Public Radio.

A retired fashion designer, Ms. Perry holds a Master of Arts degree in Cultural History from New York University and received her Bachelor of Arts from Fordham University. She conducts workshops and seminars at institutions including Queens College, New York and Syracuse universities, and the University of Arizona. She has published Leaving for America, a children’s book, and book of poetry, her recordings have won American Library Association awards, and her stories and translations are featured in several collections.

The autobiographical stories in I Loved My Mother on Saturdays, based on the author’s life — first in a shtetl in Belarus, then as a new American immigrant in New York, and finally as a garment center designer and mother — were first spun orally. This gives her writing a lively, spoken word rhythm, as if she is the raconteur in your living room telling tales out of school. This is the oral tradition in its truest sense: stories shaped by the listener and by time.
Bresnick-Perry’s stories are wildly funny and deeply moving.
— Na’amat Woman

Through these many-splendored multi-layered technicolor personal stories, filled with humor and poignant moments, Roslyn’s voice enters your heart! She carries you with her to deeper truths of the human spirit.
— Peninnah Schram

Roz Perry is one of this nation’s finest tellers of tales. Weaving her memories of the tiny town of Wysokie Litewskie into stories, she has created a priceless resource both for understanding the lifeways in the shtetlach of Belarus and other areas of Eastern Europe, as well as the American immigrant experience. I can not imagine a reader who would not find her book a gift and a delight.
— Steve Zeitlin, author, Because God Loves Stories: An Anthology of Jewish Storytelling

The seeds for the Jewish future are contained in these stories of the Jewish past. In a voice of shrewd innocence, Roslyn Bresnick-Perry describes the hardships, fears and community bonds that shaped Jewish life in the Old Country and the courage, determination and love that allowed Jewish life to bloom in American soil. She has recreated the shtetl from memory, and made a wonderful, unsentimental fairytale out of real-life yiddishkayt.
— Larry Bush

“Roslyn is a national treasure. You certainly don’t have to be Jewish to love her storytelling.”
— Jimmy Neil Smith, Founder and President, International Storytelling Center 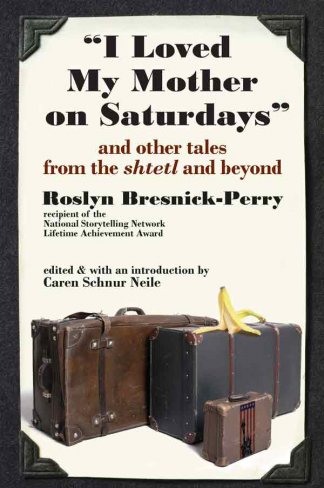 You're viewing: I Loved My Mother on Saturdays $16.95
Add to cart