A Novel of Love and Revolution

At eighty-eight, Bessie is still making trouble and still making jokes. Bessie is more than a survivor–she’s a winner, for her spirits are never dampened, her humor never fails, and her faith in human love and potential is never shaken, however long it might take for her dreams of a better world to become real.

“The most important thing in my life has been the revolutionary movement, even since I was a young child without understanding. I must have been born that way, feeling that I was with the downtrodden. . . .”

At the tender age of twelve, Bessie is exiled to Siberia because of her brothers’ anti-czarist activities. At twenty-five, she loses her husband and baby girl to the ravages of civil war in revolutionary Russia. At forty, she faces down Nazi hoodlums as she tries to disrupt a pro-Hitler rally in Madison Square Garden. At fifty-five, she is driven to an underground life by McCarthyite persecution and rejection by her own son. At sixty-two, she squares off against racists during civil rights campaigns in the South–and nearly loses the loyalty of her beloved daughter.

At eighty-eight, Bessie is still making trouble and still making jokes. Bessie is more than a survivor–she’s a winner, for her spirits are never dampened, her humor never fails, and her faith in human love and potential is never shaken, however long it might take for her dreams of a better world to become real.

Bessie is a profoundly optimistic novel about a woman who is a leader in a generation of fighters and poets. An enchanting novel from an engaging, talented writer, it is a masterful achievement of passion, grace and wit, echoing with the honest, earthy voice of the heroine–a rebel, a lover, a mother, a grandmother, a nurse, a Jew, an extraordinary human being.

Lawrence Bush has been a creative force in the American Jewish community as an author, essayist, visual artist and magazine editor for more than three decades. He edits Jewish Currents.

Bush was a speechwriter for a dozen years for Rabbi Alexander M. Schindler, the late leader of Reform Judaism in America, and also served for thirteen years as the founding editor of the magazine of the Reconstructionist movement,Reconstructionism Today. Bush’s newest book, Waiting for God: The Spiritual Explorations of a Reluctant Atheist, explores the generational factors that led baby-boomers down the path of spirituality.

Bush was the editor and commentator on the millennium edition of Leo Rosten’s classic The Joys of Yiddish. His other books include American Torah Toons: 54 Illustrated Commentaries, Jews, Money and Social Responsibility (with Jeffrey Dekro), and two fictions for adolescents, Rooftop Secrets and Emma Ansky-Levine and Her Mitzvah Machine. His essays, fiction and artwork have appeared in the New York Times, Village Voice, MAD magazine, Tikkun, Reform Judaism, and other publications, and his writings have been anthologized in Best Jewish Writing 2003; Hallucinogens: A Reader; The 54th Century; and A Mentsh Among Men.

“The most important thing in my life has been the revolutionary movement, even since I was a young child without understanding. I must have been born that way, feeling that I was with the downtrodden. . . .”

“How many beatings can this little stinker take and still be alive? Let me tell you something—I wonder myself.”

“History is not made like you make a cup of coffee. They say that a Jewish man prayed to God. He said, ‘Lord, to you a thousand years is just a minute, and a million dollars is like a penny. So please, God, give me a penny?’

Hadassah Magazine
“A marvelous story about an amazing woman. It will grip you from beginning to end.”

The Voice Literary Supplement
“Flashing from tragedy to joke to political moral . . . a tour de force, a loving recreation of the voice of a generation, complete with its idealism.”.”

The Detroit Jewish News
“A book that contains both the essence of a vital part of Jewish life in our time and a story of simple but authentic fictional art.”

The Nation
“[A] remarkable first novel.”

The New York Times:
“Lawrence Bush has written a novel about a Jewish grandmother quite different from those we usually get to read about. Bessie, inspired by his own grandmother, was a leftist, a one-time fervent Communist albeit with an independent mind that often kept her from toing the party line.

“Bessie spent her youth in her native Russia, where her brothers recruited her to the cause which eventually brought her to Siberian imprisonment. When she escaped, she came to New York and paced the immigrant treadmill, working in a factory, attending night school, meeting a young man. When the Bolshevik Revolution erupted, she and her husband sailed to Russia to join it. Her husband died and she once again fled, this time before the onslaught by the Whites, and returned to New York.

“This is an episodic story, taking Bessie through Bund rallies at Madison Square Garden, through strikes,through Vietnam demonstrations and into an old age in the Bronx,where her politics have mellowed into an acceptance of Israel and a sense of identification with the Jewish people. It is an interesting story because it is mirrored in the lives of many who went the same rougte and, without shifting their moral positions onradical issues of the day, often that the world had changed. Bessie was a realist, but this in no way conflicted with her idealism.

“Mr. Bush has written “Bessie” with love and grace. He has placed his protagonist at all the scenes that counted in the lives of such activists and yet he has fashioned a life of small incident for her as well. He has kept Bessie very much an individual and a warm human being. It is a part of the American story that is rarely recounted.”

“I’m prejudiced because I know Bessie. Not personally, but as a type. If you live in a city with an aging Jewish population steeped in left traditions, you have probably seen her in action. Now in her 70s or 80s, talking with a Yiddish accent, almost deaf and troubled with various physical ailments, she can still be found on picket lines, in peace demonstrations and at secular Jewish cultural events. She emigrated from Eastern Europe long ago, but vivid memories of fear and privation remain, flavored with a certain nostalgia for a milieu that has vanished completely. She worked in the garment shops, a gutsy, outspoken young woman. She became a radical and stayed a radical despite repression, disillusionment and apathetic (or politically erratic) children and grandchildren. She will carry on to the end.

“In the left’s literature about heroic militants, avant-garde women and proletarian misery, she is, strangely, hardly to be found. Save for a few brief moments like the Shirtwaist Strike of 1909-10, she has been a face in the immigrant crowd, steady but unglamorous. Not even the American Yiddish novelists had much use for her except as girlfriend and mother. Perhaps the reform socialists began the mocking that has steadily pursued her: when organized blocks of young women in the International Ladies Garment Workers Union challenged the New York leadership in 1911, they were offered suggestions on how they could “get it out of their systems.” From then on, her radicalism was made to seem the product of an overaggressive personality. Her image merged into the generic Jewish mother and grandmother, favorite target of wisecracking novelists like Philip Roth. Heart and soul of the left, she has never been taken seriously.

“Now elderly and in her last struggles for dignity in old age, for world peace, against Menachem Begin—she may get her vindication, from the generation of her grandchildren. Meredith Tax’s Rivington Street has been a literary turning point here. The subject is, after all, a natural. Not only were the rebel girls protofeminists, pioneers of birth control and their own sexual emancipation, they proved that women of moral strength could live their lives unbroken by the male-dominated values that persisted even in their intimate political and personal circles.

“Bessie, the remarkable first novel that Lawrence Bush has loosely based on his grandmother’s life, successfully places the type in time and space, with little of the sentimentalism one would expect and without the cardboard characters.” 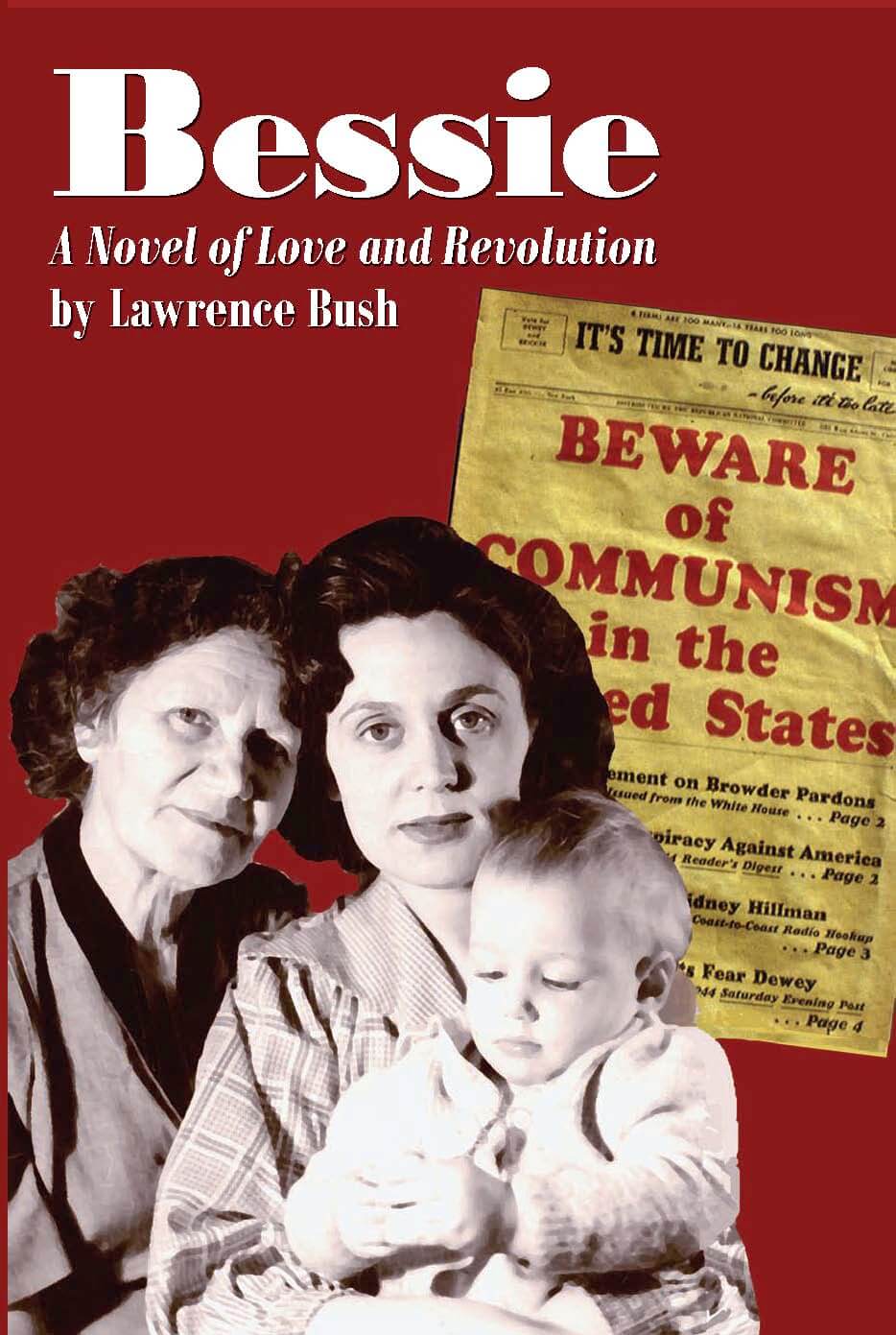