As the Story Goes

Sayings and Anecdotes of Famous Jews from the Old Country

A couple of years ago, we took our tattered copy of Mordekhai Lipson’s Di velt dertseylt to Henry St. Bookbinders on the Lower East Side, owned and operated by an elderly khosid also named Henry (“Yeah, like the street”). “Ah,” he said. “Sheyne mayselekh! This one, you don’t need to repair. You can find another copy anywhere, easy.” That might very well be true in the Hasidic world, but the stories in this book have never appeared in English.

Di velt dertseylt, published in 1928 (and a second volume in 1931), is a collection of sharp, insightful anecdotes and sayings by and about rabbis and other prominent Jewish figures from nineteenth and early twentieth century East and Central Europe. Lipson (b. Mordechai Yavorovsky 1885 Bialystok, d. 1958 Tel Aviv) attended the Radiner Yeshiva as a teenager before becoming a collector, writer, and Yiddish and Hebrew translator of secular and religious folklore in the States and Israel.

The stories in Lipson’s collection are respectful of traditional authority yet emotionally and intellectually playful, intimate, and complex. The preponderance of these stories though by no means all relate to characters in the Litvish/Misnagdic, rather than Hasidic, cultural sphere. This is significant partly because a somewhat different overall sensibility does come through than in many “Hasidic stories” (none of the selections in Di velt dertseylt, including those that are about Hasidic figures, deals with supernatural powers or “a vaytn kuk,” and some have the protagonist explicitly denying such powers). It is also significant because such oral tales, even if they continue to be transmitted within the yeshiva world, are largely unknown outside it, which is less true for the genre of the “Hasidic story.”

The stories are all attributed to actual figures, but as has been frequently noted in scholarship on folklore and oral tradition, the very telling of the story can be at least as important as the accuracy of its details. In many cases, the fact that story A is told about personage B tells us as much about the collective image of personage B as it does about B himself. To an extent what is most significant is precisely that di velt dertseylt, that these stories were circulating often generations after the persons named and characterized in them had died. 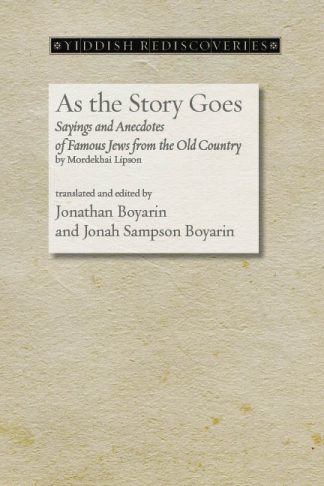