“What are these statutes, laws, ordinances, testimonies, and stories to you?”

One part sermonette, one part editorial cartoon, one part prophecy, American Torah Toons 2 applies the principle “A picture is worth a thousand words” to the central text of the Jewish religion. Bush springboards from each Torah portion into deeply personal and provocative artworks, thereby reinventing a two-millenia tradition of Biblical commentary for our visual age.

Each two-page color spread features a Torah passage, a paragraph of commentary from both traditional and modern Jewish sources, and a photo-and-word collage that responds to the text with humor, ethical conscience, and both social and self awareness.

“An illuminating and fabulously entertaining collection,” says poet Marcia Falk, author of The Book of Blessings.

A former speechwriter for Rabbi Alexander Schindler when he led American Reform Judaism, Lawrence Bush is perhaps as close as one can get to a rabbi were he not unable to get past his insistent atheism (a struggle he recounted in his memoir, “Waiting for God: Reflections of a Reluctant Atheist”).

He brings to this new project a deep concern that “we sacrifice candor to reverence in most worship services — and in most of what I see written about the Torah.”

While admitting that “As portrayed in the Torah, the Lord your God is hardly a being I’d care to worship — or meet in a dark alley,” Lawrence Bush is convinced that “the seeds of Jewish liberalism are found deeply buried in the Torah,” which “has shaped the passion for social justice for generations.”

The result is a work of creative, comic, and caustic theology that ranges from Genesis — “Maybe if we were simply to surround that word, “God,” with quotation marks, we could all be happy”  — through Deuteronomy — “So much to love. So much to feel. So much to do. What shall we do?”

Lawrence Bush is an innovative creator who has been active in American Jewish life for over four decades. He is the author of a dozen books, including Waiting for God: The Spiritual Explorations of a Reluctant Atheist; BESSIE: A Novel of Love and Revolution; and Pinko Jew, an anthology of his writings and artworks. He edited Jewish Currents, a 75-year-old magazine, from 2002-18, for which he conducted JEWDAYO, a history blog that appeared every day for nine years. He was also the founding editor of Reconstructionism Today for thirteen years. Bush’s writing has appeared in the New York Times, Village Voice, MAD magazine, Tikkun, Reform Judaism, and many other publications.

“What a vexing, funny, offensive, insightful, infuriating, thought-provoking book. At times I suspect most readers will, like me, identify with each of these descriptions. Lawrence Bush’s art and written reflections on one key text in each Torah parasha, combining  interpretations from tradition,  insights into contemporary social justice issues, and the lived experiences of the author, will deeply engage and often provoke spiritually questing and Jewishly wrestling Jews. An atheist who wrestles with the meaning of God; a  socialist who engages the politically contradictory insights of Judaism’s 3,000-year-old tradition; a secularist who cannot escape the call of religious meaning, Bush has produced a fascinating book for all —  but I believe one of particular interest to young Jews whose social justice identity is a defining expression of their Judaism.” —Rabbi David Saperstein,  Director Emeritus of the Religious Action Center of Reform Judaism

“Readers! What’s your cup of tea? Erudition? Humor? Wit? Clever visuals? Social awareness? Wisdom? Chutzpah? American Torah Toons has all this and more! Lawrence Bush has brought together his multiple talents to create an illuminating and fabulously entertaining collection.”—Marcia Falk, author, Night of Beginnings: A Passover Haggadah and The Book of Blessings 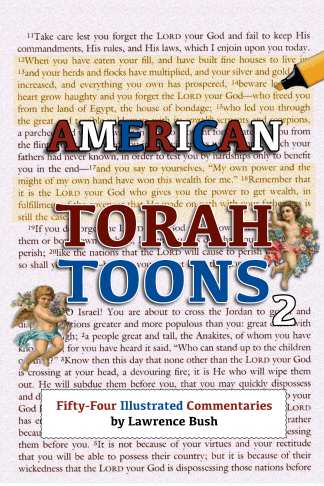